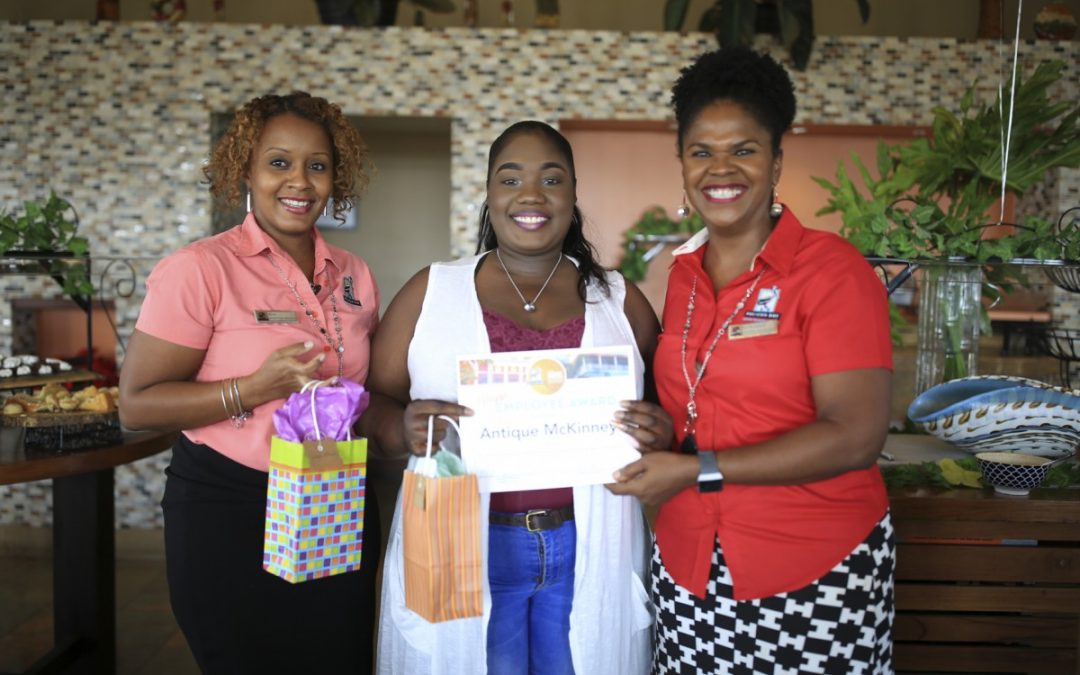 Freeport, Bahamas – Grand Bahama’s Happiest Hotel continued its tradition of honoring and celebrating its staff at its bi-annual Pelican Awards Ceremony. The highly anticipated event was held at the property’s Canal House meeting center where several of the company’s 60 employees were awarded special honors.

“2019 was a particularly challenging year for us because of hurricane Dorian but our employees really stepped up to make sure that the property was able to remain open,” said Pelican Bay Hotel Operations Manager, Della Bridgewater. “These awards give us an opportunity to showcase those who have given outstanding service and made exceptional contributions to our overall business success and were unflappable in the aftermath of Dorian .”

This year’s Pelican Awards highlighted 17 of the company’s employees who were recognized for invaluable contributions at work and those who exemplified excellence. Awards were presented in various categories for the front and rear of the house.

After joining the staff just a year and a half ago, Antique McKinney received the award for Front House Employee of the year which was received with tears of joy and appreciation. “I can’t describe how wonderful it is to know that you are a valued member of your work environment,” gushed McKinney. “It’s a reminder to us all that our contributions matter and that our employer appreciates our efforts.”

Also taking home awards were employees like Leroy Darling who was awarded the trophy for Back of the House Employee of the year, while Jordan Missick and Eddison Davis – both supervisors – were recognized for their work in the Front & Back of the house respectively.

Pelican Bay opened its doors right after the all-clear was given in Grand Bahama, as it did following Hurricane Matthew in 2016.  The hotel made rooms available for persons involved in the restoration of the island and as more of Grand Bahama’s essential services were restored, the hotel was able to open even more of its room inventory, providing assistance for many who needed shelter.

“Our staff was back at work as soon as the all-clear was given,” noted Magnus Alnebeck, Pelican Bay’s General Manager. “Everyone stepped up and helped us open and we are eternally grateful for the fact that they gave us one hundred percent even though they were also impacted by the storm.”

To celebrate their efforts and show appreciation for their hard work, employees were treated to much-needed trips to New Providence and Florida before the end of 2019. The off-island getaways were an opportunity for happy employees to relax and recharge post-Dorian and was yet another way management was able to thank its staff.

Pelican Bay is now fully operational, including its restaurant Sabor and Bones Bar, both local favorites. “We are a resilient hotel,” noted Alnebeck. “We have weathered Frances, Jeanne, Mathew and now Dorian.  We have a hard crew of workers who care very much about our island and the tourism business. I congratulate them all for their dedication to us and to the business of making guests happy.”