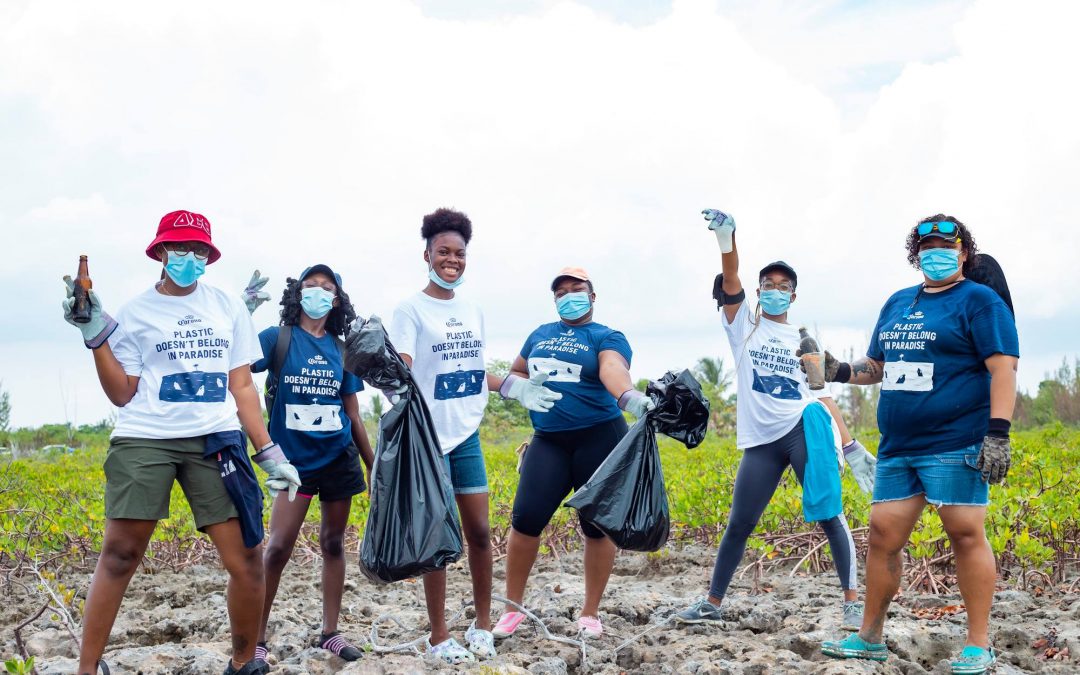 The cleanup came on the heels of a week-long promotion that saw one dollar from every six-pack of Corona beer sold at Jimmy’s Wines & Spirits stores nationwide. Over $1,500 was raised by the promotion and donated to the BNT. “Corona was delighted to see the success of the promotion as it means more resources can be allocated to protecting The Bahamas’ natural resources” says Elena Gonzalez, Sales and Marketing Manager for AB InBev – the parent company of Corona.
At the Sunday event, groups of BNT volunteers including BNT members, corporate donors, JWS staff and the Corona team got their feet wet and their hands dirty, with some cleaning up on land and others taking to the water in kayaks to remove trash deep inside the mangrove system. Participants also planted mangroves in areas that have been damaged by dumping and development.

BNT Executive Director Eric Carey said, “We wanted to do something different for World Oceans Week, and Bonefish Pond National Park is an area always in need of restoration work. Mangroves are breeding grounds and nurseries for a lot of marine wildlife. They also provide protection for coastal communities during storms. Our mangroves and oceans are interconnected – the health of one ecosystem affects the health of the other – so we thought this would be a great, unique way to recognize and celebrate World Oceans Day as well as accomplish some work that really needed to be done at BPNP. We were happy to have Corona Beer and Jimmy’s Wines & Spirits collaborate with us to create this event. They generously gave resources and manpower, and it wouldn’t have been possible without them.”

Over the past few years, Corona has cleaned up millions of square footage of shorelines across the world, as part of their mission to help to eliminate marine pollution; and they are keeping up with this commitment. “Mangroves play an important role in the marine ecosystem, and they often don’t get the same attention as beaches when it comes to cleanup events, so we were happy that we were able to come together to pull off a successful event that included the replanting of seventy-five more mangrove trees in the park” says Gonzalez. Following the successful cleanup, volunteers were treated to an ice-cold Corona beer for their hard work. The cleanup ended just in time for event-goers to make the Corona Sunset Hour at Cabbage Beach Bar for one more chance to support World Oceans Week.

World Oceans Day is a day that encourages people to see the value and importance of oceans and participate in various initiatives to help preserve and protect them. The BNT and Corona celebrated this day by dedicating a whole week to promoting positive conservation action. As the official stewards of The Bahamas’ national park system, the BNT manages over 2.2 million acres of land and sea throughout the country. Over 85% of these areas are marine environments.

Carey said, “The Bahamas’ rich history and culture are uniquely tied to the ocean. For ages, local communities have relied on the sea for income, food, and recreation. Our marine resources contribute approximately $8 billion annually to the Bahamian economy. And the value of the ocean in and of itself far exceeds this. It is a resource we as people, and as Bahamians, cannot afford to lose.”

To learn more about Corona’s commitment to protect the ocean and the role the BNT plays to manage terrestrial and marine national parks, protect species that inhabit them, and inform environmental policy, please visit them on social media on Facebook, Instagram, Twitter, or YouTube.