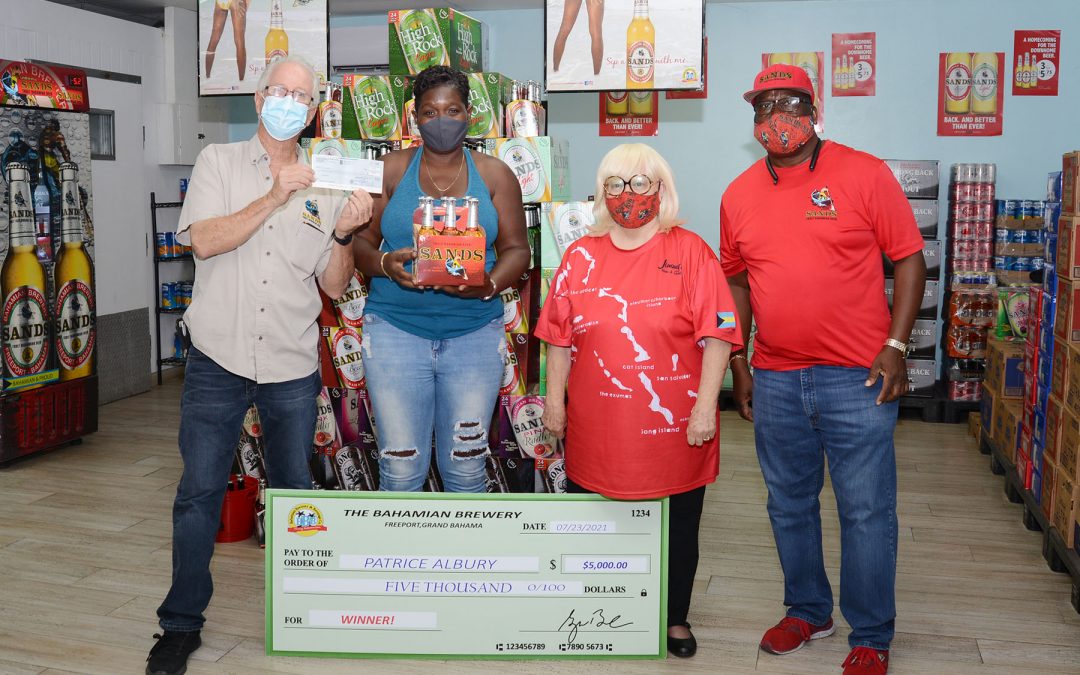 Sometimes an ice-cold beer is just about enjoying a cold one at the end of a long day. But, for Patrice Albury, her love of the great taste of Sands beer, turned into a major payday with a five thousand dollar take home!

Thanks to Bahamian Brewery & Beverage Company’s annual Scratch & Win promotion, Sands beer lovers only had to visit their favourite Jimmy’s Wines & Spirits location and purchase a six-pack of Sands products to enter to win. In return, customers received a scratch and win card, where they could win free beer, bluetooth speakers, jackets, coolers, and other brewery merchandise, along with the chance to win five thousand dollars in cash.

Though traditionally hosted during the summer months, this year’s scratch and win promotion officially launched in early March as part of the company’s re-entry into the local beer market. “The support that we receive from our customers has always been phenomenal” explained Bahamian Brewery & Beverage Company Ltd., Executive Sales Manager, Wellington Seymour. “Our customers had been waiting patiently for Sands beers to come back on the market after the devastation of Hurricane Dorian on our brewery.  To us, it made sense to reward them early with a prize-winning opportunity.”

Thousands of Sands beer consumers entered the scratch & win competition via Jimmy’s Wines & Spirits locations. “This year’s Scratch & Win promotion went exceptionally well. We wanted to ensure that there was diversity in the prize offering while increasing the probability that everyone could become a winner.  We are especially excited that our winner is from the Brewery’s home in Grand Bahama,” said Bahamian Brewery’s, Grand Bahama Assistant General Manager, Clayton Russell.

During an official drawing held on Independence Day, at the company’s Nassau Street location, Mrs. Patrice Albury‘s entry was drawn as the grand prize winner. “This couldn’t have come at a better time for my family and me,” she gushed. “I am so grateful because this will go a long way in terms of paying school fees and just making sure I’m able to take care of my boys.”

While the scratch & win promotion might be over, Sands lovers across the country still have access to great summer sales on Sands, Sands Light, as well as the well-loved, Sands Pink Radler and Sands Passion Radler. “After being gone for so long, we’re looking forward to giving our consumers full access to our Truly Bahamian beer wherever they travel in our country,” explained Sands Brand Manager, Kris Duncombe. “We have wonderful promotions and a new campaign in the pipeline, I want to encourage all our customers to follow us on social media and engage to see what’s next.”